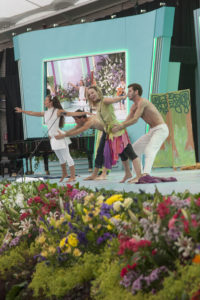 Three groups will be invited to compete for this prestigious prize. The winners of C1, C2 and C3 compete against each other on Saturday evening and therefore it is important that all dance groups stay at the event until Sunday.
Each group must present an entertaining programme of dance lasting up to 8 minutes.
The groups should have no more than 30 dancers, 8 musicians and 2 flag-bearers are allowed in addition.
If a group wins more than one category the highest scoring group from all three competitions will go on to the final.
Prizes: The Lucile Armstrong Trophy and £500

Lucile Armstrong’s interest in folk dance began when, as a young girl, she lived in Paraguay where her father had been sent to do research. In Paraguay, she learnt her first Spanish dances from an elderly lady originally from Seville. Later on in the 1930’s she lived in Barcelona where her husband was director of the British School and she went on to study Catalan dances in an esbart and classical style. The 40’s found her in Portugal where she continued to collect folk dances. She became a renowned practioner and teacher of dance from the Iberian peninsula. In the 50s, the Spanish dance community in London was close knit and Lucile’s dance classes were full due to her skill and her use of the symbolism of the choreographies.

She was a respected adjudicator at Llangollen for many years working alongside other renowned folk dance adjudicators such as Professor Roger Pinon and Lucille was known as a strict judge always seeking authenticity both in the steps, the delivery and the symbolism.